Today, I’m excited to welcome my wonderful friend Louise to do a review of the second half of the marvellous Mystery and Mayhem anthology. I reviewed part one on Louise’s blog a couple of days ago, and I’m planning to to review this half in the next week or so too 😊 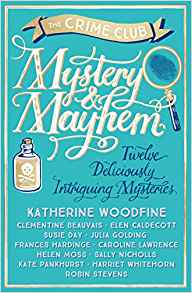 Over to Louise!
God’s Eye by Frances Hardinge

Newspaper owner Whyte wants a ‘Gods Eye’ view of London. Rival artists Solomon Cork and William Pother are commissioned, although they hate each other so much they refuse to fly in the air balloon together. With Cork flies his young employee Billy. Then Cork falls out of the balloon, and Billy’s friend Susan is arrested on suspicion of poisoning.

I love the trail of clues in this mystery. It was intriguing enough to keep me reading, and had the perfect balance of believable and out-of-the-ordinary. The set-up gives us just enough people to suspect, and gives Billy reason to care for Susan. Set in the 1800s, it comes across how exciting early flight was. People dream of new possibilities as the skies become accessible to humans for the first time.

The Mystery of the Pineapple Plot by Helen Moss

It is the 1700s. Ten years ago, a child arrived in England in a crate of pineapples. He came from the plantations, but was kept as a playmate for Lord Catchpole’s daughters. He was named for the words on the side of the crate, Quality First.

Now Lord Catchpole’s eldest daughter Eliza is engaged against her will to Lord Ponsonby. The pineapple cuttings taken when Quality First was a small child now bare fruit, and Lord Catchpole is engaged in fierce rivalry with his neighbours for the best pineapples. When a pineapple explodes, and a worm bites Lord Ponsonby on the nose, the race is on to find out who put the worm in the pineapple before servant Sam is punished.

Beautifully written. I love Moss’s prose. Her descriptions are so subtle, and often conveyed with action rather than statement. The setting is brought to life through the focus of Lord Catchpole’s obsession with the exotic. As import became wider, new goods arrived in the UK and people became obsessed with the ‘foreign’. Moss shows how what people wanted often wasn’t the real thing, but a very British idea of what another country was.

This was one of the few stories which wasn’t a murder mystery, and shows how widely the term can be applied.

The Murder Of Monsieur Pierre by Harriet Whitehorn

When Monsieur Pierre is murdered, Angelica ‘Jelly’ Beck vows to find out who did it. Was it Lady Osborne, who visited the same evening, or rival shopkeeper Monsieur Leonard?

I found this a little slow-going, but liked Angelica. We are told at the start of the story that she goes on to become a master detective, and the idea that she learned her skills in childhood must be exciting for young readers.

A necklace is stolen from solicitor Mr Mathieson’s safe, and Mr Contrad is arrested. Young empolyees Billy, Arnold and Stanley set out to find the truth, inspired by the heroes of their favourite ‘tec’ stories.

The trio of young protaganists reminded me of Katherine Woodfine’s group of young detectives. I LOVE the Sinclair mysteries, so this is positive. I liked how this story was less about the actions which happened, and more about who had the biggest motive.

The Mystery Of The Purloined Pearls by Katherine Woodfine

Kitty Shaw’s pearls are stolen from her dressing room. She won’t go on stage without them, to the horror of the theatre producers. Why would anybody steal Kitty’s pearls?

Did I mention, I love the Sinclair Mysteries? This story is set in the same world. Instead of being told by Sophie, as in the novels, it is narrated by Lil. It was lovely to be back in a familiar world, and to hear Lil’s voice in first person. The set-up is great – a group of people are introduced, and it became apparent that someone’s actions and reactions were a little out-of-sync. A little suspicious.

The Mystery of Room 12 by Robin Stevens

James Kahn is left on reception one evening in his father’s hotel. He knows he checked Stella Smith in. Knows she wrote her name and went upstairs. In the morning, her name is gone, her room spotless and nobody believes James.

Could Stella Smith be runaway Andrea Sandford? If so, what happened? Did she simply disappear? And why are the other guests so keen for him to forget he saw her?

Unlike most of the stories in the book, it isn’t clear whether there has been a murder or any sort of incident until near the end. I love this format. Robin Stevens is masterful as what she reveals when, and I was hooked. It also had my favourite overall line, about adults: ‘they’ve been around too long, and that means they can’t see what has really happened because they’ve seen too much other stuff already’. Brilliant observation.

Thank you so much to Louise for these fabulous reviews! What did you think of this anthology, if you’ve read it?